ULIP vs. Mutual Funds – The Winner Will Surprise You

Fight between ULIPs and ELSS is a golden contest of financial instruments. In a country where maximum investments occur due to tax rebates, it is not surprising that tax-exempt schemes get the limelight. People have asked this question ever since the ULIPs and Mutual Funds competed in the investment space. Even, the regulators fought for the control over who sets the rules of the game. However, all that is now sorted. But the question remains, ‘in the final quarter of a financial year, when you must invest to save your precious income falling into government hands, where do you invest? ULIPs  or ELSS?’

What is ULIP or ELSS?

If you already know, better scroll down and get to the point…

For the uninitiated, ULIP refers to Unit Linke Insurance Plan and ELSS refers to Equity Linked Savings Scheme. ULIPs are life insurance policies with a large chunk of investment attached to it. In a way “ULIP = Mutual Fund + Term Insurance“. You can also call it, a life insurance policy where you can select where your money should be invested.

Those who are familiar with mutual fund investments would know that mutual funds allocate units at NAV (Net Asset Value) to the investors. For example, if you invested Rs. 10,000 in a mutual fund and the fund NAV is Rs. 10, you are allocated 1000 units in the fund against your investment.

Similarly, ULIPs also assign units to their investors against the invested money. Also, there is an inbuilt term insurance cover too for the policyholder. Thus the name, ‘Unit Linked Insurance Plan.’

Where To Invest ULIP or ELSS?

While most blogs and analysts will side with either, here we present an objective answer. Our answer is based on our analysis of multiple factors associated with both ELSS and ULIPs. If anyone ever tells you that ELSS is better, we’d say they are assuming. We have analysed 25-year performance for both ELSS and ULIPs and the answer will surprise you…

And the answer is, “It depends on your investment horizon. If it is less than 12 years, you are better off with an ELSS, if it can be more than that go with ULIP.”

Given below is the comparison of two aspects of both ULIPs and ELSS schemes. However, to give both schemes a level playing field we have added term insurance cover with ELSS. Thus, the sum invested in ELSS is also sustaining a term insurance cover for the investor. The sum assured of this term cover is same as it would be in the ULIP; i.e. Rs. 10 Lakh.

Investment Yield refers to the annual compounded rate of return you achieve for a period of investment. The comparative yield curves for both schemes is given below: 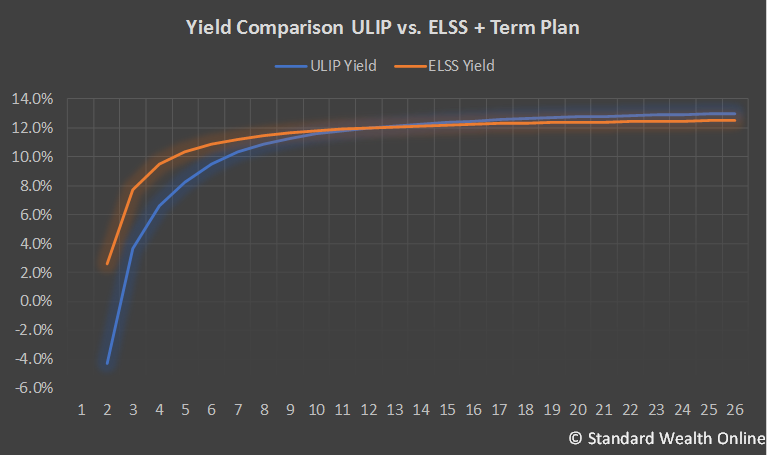 The yield curve for ULIP surges ahead of ELSS + Term Plan in the 13th year of investment. For the first 12 years, ELSS + Term combination offers you higher returns.

What Changes in Budget 2020 for Individual Taxpayers…

Does ULIP Win Hands Down?

Not really. There are quite a few caveats to higher ULIP returns than just the holding term of 12 years. Following are those conditions:

Changing any of the three conditions will alter the estimates in favour of ELSS. Also, out of the three the ‘long-term commitment’ is the trickiest. It is here the ULIPs suffer the most. Since, if you want tax deduction as well as good investment return, you must commit for at least 15 years. That too, with annual investment, and not with one time or partial premium payment term.

Also, if we remove term insurance from ELSS investment, ELSS will have lower annual expenses. Though ULIP will still offer better returns, ELSS will enjoy a longer period before ULIP beats it.

So Should You Invest in ULIP?

Yes, if the following apply to you:

When To Invest in ELSS?

If you are an experienced investor and know where you are putting your money, you probably already know the answer. But, if not, here are the conditions when ELSS will score over ULIPs. If you:

This is an objective analysis, based on the current expense ratios of ULIPs and ELSS schemes. The assumed expense ratios are provided below. Any change in these ratios in future may warrant a revisit to the calculation board. Till then the analysis provided above holds true.

Why ULIP Wins in Long Run?

The answer to this slow catapult lies in the way charges are applied in both ELSS and ULIPs. Both schemes have their own advantages and disadvantages. For example:

Expense Ratios for ULIPs as of May 2017

Expense Ratio for ELSS schemes as of May 2017

What Is A Health Insurance Plan?

What Changes in Budget 2020 for Individual Taxpayers (Salaried)?

Your Retirement Plan Doesn’t Have to Be Only Financial

Standard Wealth Online is an IIM Alumnus initiative to bridge the financial literacy gap across India.

Here you can expect to find: