All You Need to Know About GST

GST is the latest set of reform brought in by the Centre. Let's see what it means for all of us...

We all have these and many other questions, here in this post we try to address many such queries.

What is GST or Goods and Services Tax?

Goods and Service tax (GST) is an indirect tax applicable throughout the India except for the Jammu and Kashmir (Applicable now, after J&K Assembly passed the bill on July 5). Some characteristics of GST in the latest form:

What does Consumption Based Tax Means?

It is a consumption based tax. Meaning it will be payable in the states where the goods and services are consumed by the final user and not to the state where these goods were manufactured or produced.

This will induce the much-needed induction to the interstate economy, and help the under developed states to grow.

In India, we have adopted a dual GST model, means the taxation is administered by the both Union and State Governments. There are two components of GST namely Central GST and State GST. This dual GST will be levied on the supply of Goods and Services across the Country.

How Will the Exports be Taxed under New GST?

Under GST regime, export of goods or services or both (hereinafter, referred to as supply) has been termed as Zero-Rated Supply.

To export zero-rated supply the registered person or supplier can opt for either of the following two options:

Note: If the supplier wants to claim refund the Supplier should be a “Registered Supplier”.

Procedure When Supply (Export) is After Payment of IGST

When Zero Rated Supply is made after making payment of IGST, following procedure is required to be followed:

The application shall be deemed to have been filed only when the person in charge of the conveyance, carrying the export goods, duly files an export manifest or an export report covering the number and date of the ‘shipping bills’ or ‘bill of export’ and the applicant has furnished a valid return in GSTR-3.

Forms for Filing Return Under GST:

Procedure When Supply is Without Payment of IGST

When Zero Rated Supply is made without payment of IGST, following procedure is required to be followed:

Consequences if Above Conditions are Not Fulfilled

The supplier will pay the tax due along with interest thereon at a rate of 18% per annum, from the date of issue of invoice, within 15 days of the expiry of such period.

In GST, there are different rates for different Goods and Services, most prominent of them are as follows: 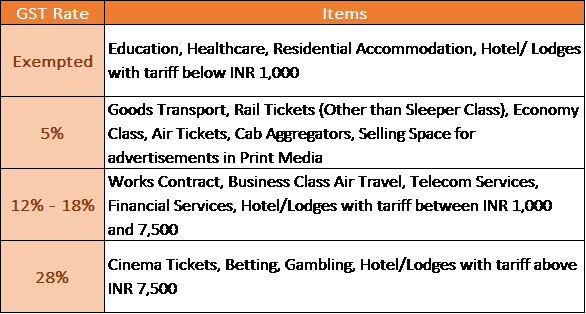 Advantages and Disadvantages of Current GST

Hope GST will benefit in the growth of the economy and reduce the tax burden for people and businesses.

Chartered Accountant by profession, completed Bachelors and Masters in commerce from Delhi University. Introvert and Taxation Expert. Writing is my passion and an alternative way to express myself and use my free time better. Share your thoughts in the comment section below and any questions you have about the topic.

How to start budgeting? For Parents With Teenage Kids

How I Repaid My Credit Card Dues With Personal Loan

What If You Cannot File Your ITR by 31st December 2021